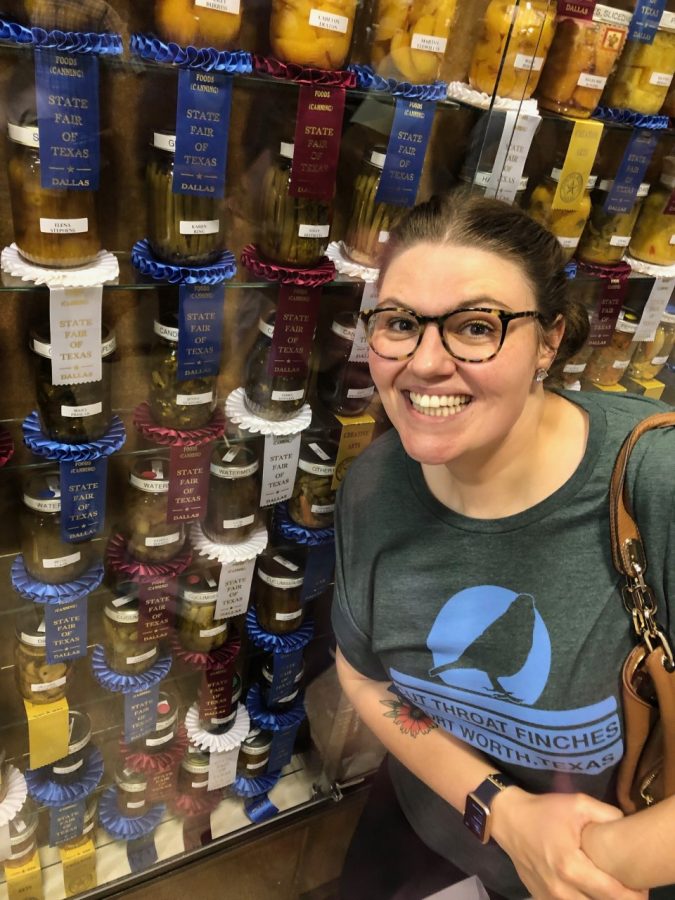 Librarian Jenny Stewart not only loves reading, but spends a fair amount of time in the kitchen. Her jams are prize winners this year at the State Fair of Texas.

If you’ve ever wandered into our school library, received help with a tech issue, or received a Chromebook then you know the librarian Jenny Stewart. While you might know her as our helpful librarian you most likely don’t know about her secret passion. That passion is none other than canning. (The act of processing, or business of preserving cooked food by sealing in cans or jars.)

Stewart started canning in college when she went to Texas Tech. She had a garden where she grew jalapenos. Her plants prospered which led to an excess of jalapenos. During a phone call with her grandmother she brought up just how many jalapenos she had, and her grandmother recommended pickling them so that she could preserve them.

“It spiraled from there”, said Stewart. After moving to Fort Worth in 2015 her love for the State Fair grew rapidly. One year, when walking around the fairgrounds, she made a stop at the infamous butter sculpture located by the creative arts building.

Jars filled with salsa, candied jalapeños, and bread and butter pickles ready to be canned.

After seeing the sculpture she wandered deeper into the building. When she went inside she saw rooms filled with different competitions, including canning.

That very next year Stewart began to submit her own canned goods.

In 2017, after a few years of submitting her homemade canned goods, she won second place in the competition for candied jalapenos. “After winning I was hooked”, said Stewart, “I knew from then on I would always submit some of my different goods.”

Every year she has to decide what recipes she wants to submit that year. Stewart says that “ I normally pick four different items to submit. One recipe I have never tried to make before, and three recipes that I feel confident about.” During this time she does extensive research and perfects whatever she decides to submit. The registration deadline is in July, and submissions are due the first weekend of August.

Last year might have been the most difficult she has competed in yet. “I got Covid in January and one of the symptoms that I experienced was losing my sense of taste,” said Stewart, discussing her biggest challenge. To this day she still experiences her sense of taste being perfect one day and then practically disappearing the next.

Tables at the first day of submission in August filled with various canned goods.

Despite that struggle, this year she decided to submit four items. She chose three recipes she felt confident in. She picked bread and butter pickles, mango habanero jam, and mango jam. Finally, she chose one recipe that she had never tried before, apple butter.

While Stewart was in the process of perfecting her recipes, she relied heavily on her friends, family, fiancé, and fellow librarian Michael Mendez. With this support, she was able to persevere and received honorable mentions for her bread and butter pickles and her mango jam.

Some of Stewart’s favorite recipes are cranberry jalapeno relish in the winter and peach pepper jam for the summer. Some of the most unusual canned goods she has made were pickled peach jam and carrot cake jam.  Here is one of Stewart’s recipes…Have fun!

Bring fruit mixture to a rolling boil and allow to boil for 1 minute while stirring constantly.

Add pectin and bring mixture back to a rolling boil. Allow to boil for 1 minute while stirring constantly.

Process jars in a water bath for 15 minutes.