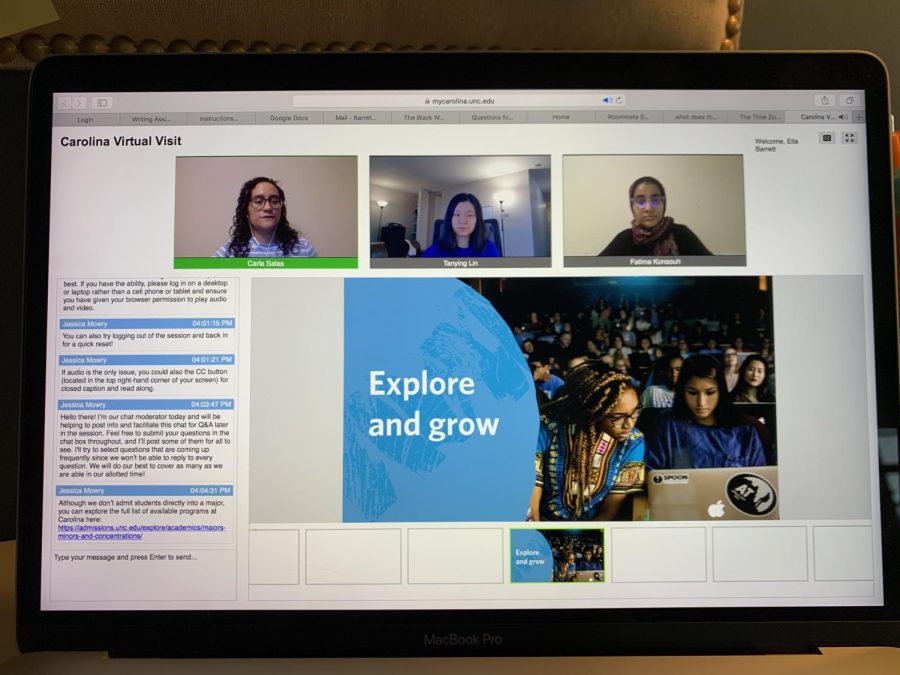 The time after submitting college applications but before hearing back from said colleges is an extremely stressful time. You sit there worrying about whether or not you’ll get accepted and that sometimes leads to contemplating what you’ll do if you don’t get into any colleges. All in all, it’s not super fun. However, taking tours and researching colleges can help ease some of that stress, but this isn’t a self-help article.

If this was a normal year, the second semester of my senior year would be looking pretty different right now. While I would still be waiting to hear back from all of the places I have applied, it is likely that I would have visited the campuses already and basically already have a good idea about where I would go, pending my acceptance.

But this is not a normal year and because of that, my experience is different. I have applied to ten colleges and I submitted all of my applications before Thanksgiving. Because I am invested in ten different colleges, I have seen many different options when it comes to tours.

Duke is my absolute dream college, but I won’t hear about a decision until around April 1. That hasn’t stopped me from stalking their website and trying to find out as much information about the university as possible, which leads me to the first tour option I have seen: youvisit.

Youvisit is a company that creates virtual reality tours for different universities around the country with a little person in the corner who speaks to you as if you were really there. It guides you through different key places on campus and usually ends with information about the town or city the college is in.

The Duke tour begins at Abele Quad and then takes you through each of the different undergraduate schools and lets you look inside the Perkins and Bostock libraries. Later it detours to athletics and residence life before ending with the Nasher Museum of Art and giving some details about Downtown Durham.

The tour takes under thirty minutes and is extremely informational. By the end of it, I felt as though I had really gone to campus and had a walking tour–this was, of course, before I actually had a walking tour of a university.

Recently, I took a Guided Virtual Tour for the University of North Carolina at Chapel Hill. Let me just say, it did not meet my expectations. It was my hope that the tour would pan out the way the youvisit tour did except with a real person who I could ask questions. Instead, I got something very different.

To access the tour, I had to click on a link given to me in an email from the university. However, instead of redirecting me to a zoom link like I was expecting, I was redirected to a UNC website. On one side of my screen was a chat bar. In the middle was a powerpoint and above the powerpoint was three video screens.

One video screen was of the Assistant Director at the Undergraduate Office and the other two were sophomores at the university. One majors in computer science and the other is a double major in neuroscience and business. I was not on camera and according to the Assistant Director, who was the official tour guide, there were lots of people from all over the country in attendance.

For fifteen minutes my tour guide worked her way through a powerpoint that consisted of information that I easily could have found on the university’s website and she occasionally let the sophomores speak about their experiences at UNC. There was no special insight into the university, the campus, or the culture.

The second fifteen minutes of the tour was ‘question time.’ Despite taking up fifteen minutes, only three questions were answered. The students were allowed to answer the questions and took their time giving anecdotes that did not particularly relate to the questions. In the chat bar, a fourth university representative was present, supplying us with helpful links to UNC’s website depending on what question we were talking about at the time.

Overall I was unimpressed by the tour and I have no new feelings towards UNC. Instead of getting a vibe of the school or the people (or even pictures of the campus), we talked about the different academic programs and how to apply for scholarships. I felt like it was intended for juniors looking to apply rather than someone who has already applied and is trying to make a decision.

In the beginning of February, I drove down to Austin, Texas and took a tour of the University of Texas. I am a born and raised Aggie so let’s just say I wasn’t expecting much from UT and that I was pleasantly surprised.

UT is currently only giving tours to accepted students (to even register for a tour, you have to use your UT ID) and, lucky for me, I have been accepted. It had been years since I was in Austin and I had never been to the college part of the city. I was instantly struck with how much of a city Austin is. To me, it felt comparable to San Francisco or Nashville.

My tour started at 9am and my tour guide was a senior majoring in journalism and minoring in educational psychology. We started our tour at Jester Hall (a large residence hall) and continued down the ‘Yellow Brick Road,’ which is a brick path that leads straight through campus that cars are not allowed to drive on.

We made stops outside of different student centers (one of which supposedly has a room that was made specifically for napping) and different educational buildings, most namely the engineering building and the computer science building. Eventually we came to the Turtle Pond (my favorite part of the tour) and ended at the Tower.

Overall the tour was great. My tour guide was very informational and she added cute little anecdotes along the way. The campus was beautiful with ranges of buildings built in the early 1900s all the way to buildings built in 2015. Despite being in the middle of one of the largest cities in Texas, the campus was quiet and peaceful.

However, there were two major drawbacks. One, we couldn’t go into any of the buildings during the tour. UT is very cautious about preventing the spread of COVID and so, in an effort to remain safe, we could not enter buildings during the tour. Two, the campus was a ghost town. Nearly everyone is taking classes online–again, in an attempt to stop COVID–but that made it hard to get a vibe of what campus life was truly like. By not having a full and bustling campus, UT seemed like a ghost of what it should have been but it’s all understandable in the grand scheme of things.

About a week before my tour of UT, I toured Texas A&M. It would be an understatement to say that it was very different from UT. The campus was booming. Everywhere we went, we saw people. Not only were there people in class but there were people lounging the grass and sitting on benches and riding the university’s rentable bikes. Another major difference was that we were allowed inside the buildings.

This tour began at Rudder Tower which is right next to the Memorial Student Center (MSC). This time my tour guide was a senior who majors in Kinesiology. We went on an hour long walking tour that essentially took us in a circle beginning and ending at Kyle Field.

We visited the MSC, the natural science building, the Military Walk, and a few other buildings. We went inside them and saw some lecture halls and a newly constructed building designed to create an “optimal study environment.” After the walking tour, we went to North Campus and got a tour of the residence halls there.

My tour guide for the residence halls was from Keller and he said that he remembered running against Paschal in track meets when he was in high school. We got to see the different styles of dorms in several buildings and we ended in Hullabaloo Hall. I will say Hullabaloo Hall was the best dorm I have seen at any college, online or in person. The building was built recently and has many, many student resources intended to make life easier for the residents.

Each of the tours were distinctly different and, for the most part, gave me the general vibe for each of the schools. Coming in last place (I HIGHLY recommend you do not take this tour) is the Carolina Guided Virtual Tour.

In third place, the Duke youvisit tour. While this was very informational and displayed the gorgeous campus, it’s hard to get a vibe of the campus and students when you’re staring at a computer screen.

In second place, the UT Modified In-Person Tour. It did a fantastic job of showing off the campus, its amenities, and Austin but due to the lack of people and inability to go in buildings, it was hard to judge what it would truly be like to live there.

In first place is the A&M Walking Tour. This tour was amazing. I was able to see the campus how it would be if I were to attend the university and got a good idea of how people interact with each other.

However, touring a college is only part of it–you have to get into the college for your tour to be of use. This leads us to what is commonly known as the College Waiting Game. The College Waiting Game is arguably THE most stressful part of the college application process. You’re just anxiously waiting for months. As I said earlier, I applied to ten colleges across the country and I submitted all of the applications before Thanksgiving.

I have heard back from two schools: A&M and UT. I got into both of these schools by being in the top six percent of my class. However, for the other eight schools, there is no such condition and I made a CRITICAL mistake.

For any underclassmen reading this, learn from my mistake: apply with the Early Action Deadline. Let me tell you something that I wish someone had told me. There are three types of deadlines when applying to colleges.

1) Early Decision–if you get in on early decision, it is binding and you MUST cancel all applications to other schools.

2) Early Action–you find out sooner if you get in and increase your chances slightly of getting into a school but is NOT binding.

3) Regular Decision–you find out at the same time as almost everyone else.

Being the distracted person that I am, I didn’t know the difference between Early Decision and Early Action and so I submitted all of my applications under the Regular Decision deadline due to an “abundance of caution.” I found out the hard way that this is torturous.

My last application was submitted November 21. The earliest I will hear a decision is March 1 (but it is unlikely) and the latest I will hear back is April 1.

Maybe this wouldn’t be so incredibly unbearable if my friends were going through something similar. Instead all of my friends used their brains and submitted everything with the Early Action deadlines or had no need to. Almost all of them now know where they are going.

I, on the other hand, will sit here and wait until April and listen to my family debate on which school I will attend out of my current two options. So let me say it one more time: apply under Early Action so you don’t add unnecessary stress to your last semester of high school.