What Can a Girl Do to Get Some Equal Pay Around Here? 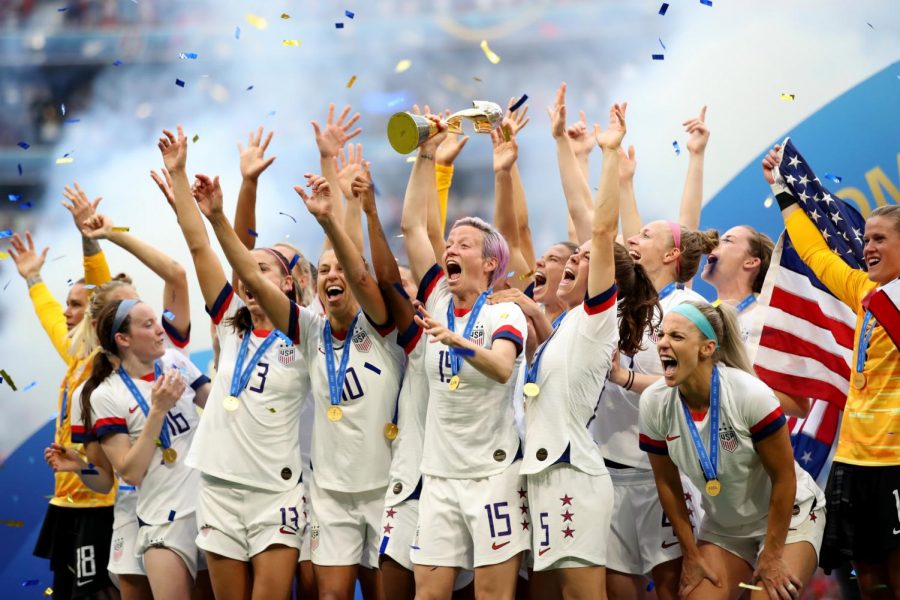 All of this stems from the lawsuit that was formally filed in May of 2019 where the players on the USWNT demanded equal pay and equal working conditions. Since then, the USWNT demand for equal pay has been dismissed by a judge, however, the women are standing their ground.

This agreement marks some long overdue forward movement for the USWNT but is only the first step to righting a lot of wrongs.

We reached out to Coach Brittany Rose, the girls junior varsity soccer coach, and Damaris Deschaine, the girls varsity captain, to get their reactions.

Brittany Rose, JV and Assistant Varsity Coach
What are your thoughts about the agreement between the USSF and the USWNT?

I think the agreement is a step in the right direction, however I don’t think it was the solution they were looking for.

Do you think the USWNT asking for equal conditions and equal pay is reasonable?

Absolutely. Equal conditions should be the standard practice and non-disputable; equal pay is another thing…they’re seeking equal pay for “doing the same job,” but in the real world–not everyone gets paid the same amount for doing the same job. Not all nurses, teachers, managers, etc. get paid for doing the same job–it’s about the revenue and production. What you’re putting into it is what you will get out of it. Do I agree the men’s salary should start so much higher than the women’s? No, but to get the respect and money you deserve, you must put in the work and produce the results.

Do you think that equal pay is deserved?

Yes deserved, but again, I don’t think everyone should get equal pay across the board and that includes the MNT. I think it should solely depend on your production and the results–just as any other business would.

Do you think it is reasonable/fair for the USWNT to ask for $66 million in back pay for their World Cup titles?

Do you think it is important that the USWNT gets equal pay?

See above; yes, the base salaries for both the WNT and MNT should be equivalent and the remaining prize fees, etc. should be based on production/results.

Do you think this movement will affect the future of women’s soccer? In what way?

Yes, it’s allowing for women to have a higher standard in what is acceptable working conditions/salaries, but shouldn’t just be based on gender alone. It should be based on you work ethic; what you put into it is what you get out of it.

Damaris Deschaine, Varsity Captain
What are your thoughts about the agreement between the USSF and the USWNT?

I think that the agreement is kind of unreasonable in that yes, they are trying to figure out a way to get equal pay, but maybe the agreement is just keeping them quiet and just making their team baseline paid.

Do you think the USWNT asking for equal conditions and equal pay is reasonable?

I do think that the USWNT asking for equal pay is reasonable because they have won 4 World Cup titles and the men have barely even qualified. They [the women] have tons of fans that watch them from all over the world and they deserve it.

Do you think that equal pay is deserved?

Equal pay is deserved; when you see how well they perform and outperform most teams, you see that they deserve it.

Do you think it is reasonable/fair for the USWNT to ask for $66 million in back pay for their World Cup titles?

I do think that the $66 million is fair to ask based on the fact that they have won 4 titles, they have won 2 back to back, and they deserve that money because they worked so hard to get there and they do their part to represent the USA.

Do you think it is important that the USWNT gets equal pay?

It is very important to them and all the young kids and people who look up to the team that they get equal pay because it pushed them to work harder and know that what they are doing is good for the country.

Do you think this movement will affect the future of women’s soccer? In what way?

I do think this movement will help women’s soccer in general, making more younger girls want to follow in the footsteps of the USWNT players and it will cause more uprising in the soccer community.

For some context, below is the link to the article written by CNN that this article was based on.