Does Juul Market to Teens? 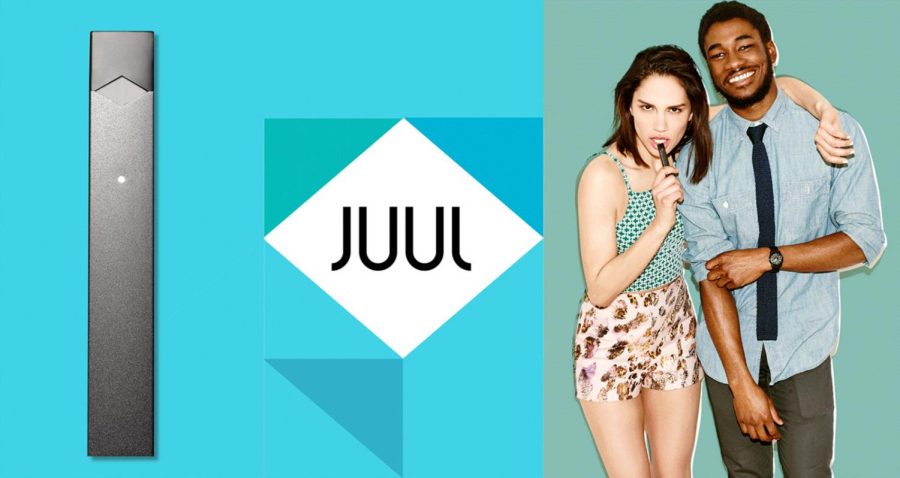 Juul, the company responsible for creating a “safer alternative” to smoking, has come under scrutiny as of late because many people, including the American Heart Association and parents across the country, feel that they market their products to teens and underage users.

The complaint comes in regards to their early marketing campaign, Vaporized. The campaign features pictures of young, college-aged adults and bright, colorfully patterned backgrounds. The people photographed may be young but they clearly aren’t high school kids or underaged.

The bright blue and pink colors that cover the campaign have also been said to “attract underage users” but all I can think of when I see that is ‘people that are over 21 don’t like pretty colors?’ This company is marketing to teens through using bright and inviting colors? Unlikely.

But even if Juul’s advertisements feature overage models, Juul had a large presence on social media. Juul used Instagram to launch Vaporized and while there are adults and older people on the app, it appeals more to teens. According to adage.com, Juul had 11,000 followers on Twitter and 77,000 on Instagram.

The large number of teens on the app brings in the problem of exposure.

Juul recently shut down their Twitter and Instagram accounts due to the high number of underage users. However, things that were once on the internet are never really gone. SRITA, the Stanford Research into the Impact of Tobacco Advertisement, has been documenting Juul’s marketing and social media posts for a long time.

On their website, tobacco.stanford.edu, you can click on the ‘pods’ tab and that takes you to a page where there is a grid of 16 boxes, each with a picture and label. Each redirect you to a page with images of Juul’s marketing. The labels range from the Vaporized campaign, to Instagram posts, to #juul posts, to discount fliers. There is even a label for Time Square advertisements, which has the smallest number of pictures with 17 images.

SRITA leans toward the side of “Juul has marketed to teens”. One of the captions of an advertisement reads, “These advertisements clearly resonated with a younger demographic, school age teens, which seek to emulate the cool and trendy look of playful twenty something models.”

“I 100 percent feel like they have marketed to teens,” one Paschal student, Catherine Sands, says. Juul, since its launch, has consistently been advertised as a ‘healthier alternative to smoking’ and a way to quit.

Juul has reached its target audience, to some degree. The only way to make people know about your product is to advertise, and that seems to be something that some groups don’t seem to realize when they are bashing Juul for its marketing campaigns. It’s no surprise that young, underage teens are getting caught in the whirlwind when Juul is marketing on all platforms to increase its outreach.

According to forbes.com, Juul has done two things to try to stop underage use. The first thing is the shutting down of the social media accounts. The second thing is that on November 13, 2018, Juul announced that they would stop selling the fruity flavors in stores, but still online.

The thought behind this move is that the fruity flavors appeal more to a younger audience than the target audience. Flavors like Creme Brulee, Cool Mint, Cool Cucumber, and Fruit Medley were renamed Creme, Mint, Cucumber, and Fruit to try to make them seem less “treat-like.” The FDA banned flavored cigarettes, although not e-cigarettes, so the discontinuation of selling flavored pods in stores is a step forward for Juul.

Juul’s own marketing, however, isn’t the only thing advertising juuls to a younger crowd. Netflix is home to many shows and movies and every now and then, you’ll see the little vape in a scene or two.

The movie Someone Great, which is focused around a woman going through a rough breakup and getting over it in a drugged-up day, shows one of the main characters casually taking a hit off a juul. The vape is not addressed, just accepted as a part of everyday life. And shows like American Vandal and The Magicians have had strategic product placement.

Product placement is a type of advertising and a good way to show off your product without being ‘in your face’ about it. However, product placement can be dangerous because of who gets exposed to what.

My 15 year old sister and I watched Someone Great and we were exposed to the casual use of a juul (not that we don’t experience that at school everyday). Even though my sister and I were younger than the movie’s target audience, it’s still marketing to the younger group of people who like rom-com/breakup Netflix originals.

“I found out about Juuls from one of my good friends,” one Paschal junior says. “I like it because the buzz feels good.”

When asked about how they found out about Juuls, another student said, “I don’t know, they’ve just always been around. I remember the suorins but then one day Juuls just appeared.” And yet another student says that their good friend showed them her Juul.

The people I’ve talked to didn’t even know that Juul had an Instagram account; they found out about it in other ways. But whether or not Juul purposely advertised to teens, there’s no doubt about teens actively spreading juuls among each other.

But my interviews with Paschal students have told me the exact opposite (one student even saying that Juul has “100% marketed to teens”) so why have we reached different conclusions?

It is my belief that the answer to that question lies in subtleties and technicalities. If you look at the Vaporized campaign advertisements, you can see that the models are young but not high school aged. There are models with tattoos, but you don’t notice that unless you’re really looking. It’s all technicalities. At a glance, the models may look underage but if you examine them, you can see they aren’t.

The product placement of juuls in movies and tv shows is not because of any legal agreement with Juul. An article from refinery29.com even states that Juul did not press for their product to be in the shows. Sera Gamble, a showrunner for The Magicians, says that the juul is present in the show because of how trendy juuls are.

These technicalities and subtleties make Juul’s claim that they haven’t marketed to teens almost irrefutable. If anyone claims that Juul has marketed to teens, they can tell them that they haven’t. Or at least, that they haven’t done so directly. They did not force or pay the writers of American Vandal or The Magicians to place their product in the show; they have “visibly overage” models in their pictures; the Juul hashtag is out of their control; they’ve made “conscious efforts” to diminish teen addiction. They “never intended” to have teens use their products, but is that actually true?

The answer to that is tricky because no one will really ever know if Juul purposely marketed to teens and even if they did, why would they admit to that?

This the link to the SRITA site: