"The Sleeping panther" lying down at the proposed sighting of the downtown panther, located at the corner of Main and Weatherford.

“Things were so quiet I saw a panther asleep on Main Street”. Exploring the various Points of Interest around Texas, we take a look at Sculpturist, Deran Wright’s “Sleeping Panther” statue and his application of artistic magic using the words that led to Fort Worth obtaining it’s intriguing nickname, ‘Panther City’.

The year was 1873, a few years after the Civil War had ended, the nation was entering an economic depression from Railroad over-expansion and failure to repay loans. Fort Worth was nearing the likes of a ghost town, as people began abandoning the city in search of work. This would change with former Fort Worth resident, Robert E. Cowart.

After writing to the Dallas Herald about his experience in Fort Worth, while attending a meeting, Cowart explained seeing a sleeping panther in the quiet city. Going on to say how the panther was, “undisturbed by the rush of men or the hum of trade.” Editor of the Fort Worth Democrat, B. B. Paddock, amused by the story wrote a masthead embracing the insult with a panther lying down and the motto “Where the Panther Laid Down”. The insult became a part of Fort Worth and a symbol of the city’s strength.

Fast forward to today, Deran Wright’s bronze panther lies where Cowart ‘saw’ it on that quiet day. The Sleeping Panther can be found at the corner of Main Street and Weatherford Street, resting in front of the Tarrant County Tax Office, downtown. Besides the traffic that occasionally burdens downtown, the Sleeping Panther is easily accessible to the public, as well as many other panther statues scattered throughout the city.

Amazing how an insult from a cheeky Dallas man could forever be eternalized, giving Fort Worth an intriguing nickname. “Whenever Fort Worth feels snubbed, there’s a tendency for the panther to work its way back into conversation,” Carol Roark, a Tarrant County historian  stated. “It’s definitely a badge of honor worn by Fort Worth citizens.” 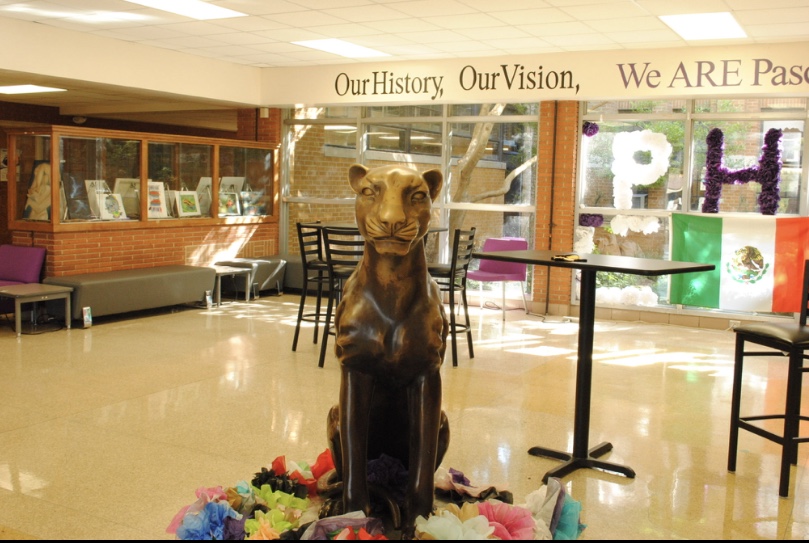 Giovanni MataRascal the panther standing proud in the front foyer of Paschal.

Roark’s words couldn’t have been any more accurate, as there are many panthers scattered throughout our city. From Hyde Park’s Sleeping Panther fountain, to the Panther heads watching over us from the Fort Worth’s Flatiron Building, to the Panthers that stay alert on the badges of our own Police Department, and to our very own Panther in the foyer of Paschal High School. However, our Panther isn’t resting.

If you enjoyed this piece, make sure to check back weekly for even more Points of Interest around Texas compiled by the Pantherette.